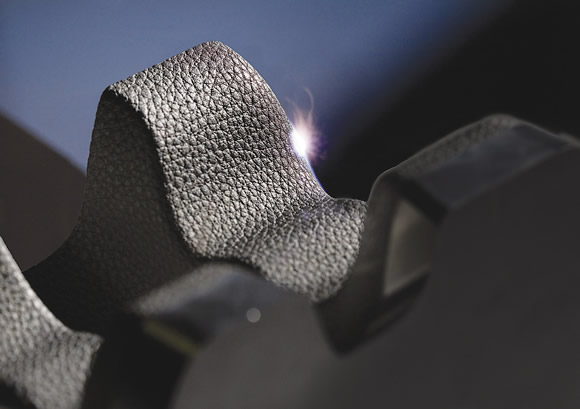 Among the reasons manufacturers perform surface-texture operations is to change a part’s appearance, change how it feels, lower its reflectivity and/or decrease friction. Textures can be applied by sandblasting, waterjet cutting, mechanical imprinting, chemical etching, EDMing and lasing.

Though texturing has been performed for a long time, it’s only in the past 20 years that laser surface texturing (LST) has emerged as a mainstream application. Lasers offer unparalleled control of the surface microstructure and can produce miniscule features with high aspect ratios. One laser shop that offers LST reports producing surface-feature geometries as small as 5µm (see sidebar,below).

Individual features of a textured surface usually are produced with one laser pulse; in some cases, a few pulses are applied.

Any laser can be used for LST. Choosing the best one for a specific job, though, depends on the material, desired feature size, processing-speed requirements and budget constraints. Ultraviolet lasers produce the smallest features, and UV lasing yields the cleanest processes. Infrared (IR) lasers offer higher speeds and cost advantages.

Laser light for LST can be delivered by any standard method: fixed beam, galvanometers or mask imaging. The best method for a specific application will depend on the laser used and process requirements.

Most of these applications involve lasing features that decrease friction between moving surfaces. The reduction in frictional forces occurs for two reasons: texturing removes material, thereby lowering the surface-to-surface contact area, and the removed material eases the flow of lubricants applied to these surfaces. 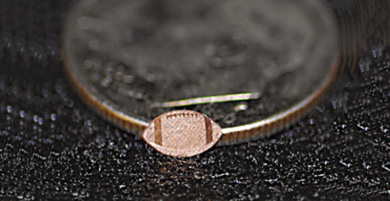 A 5mm-wide football (leaning against a dime) that Mound Laser made from 0.2mm-thick copper. The depth of the football’s texture is 0.005mm. Image courtesy Mound Laser & Photonics Center.

Lowering friction also reduces the contaminants generated when surfaces abrade one another. This, in turn, extends component wear life. Sometimes, coatings such as diamond-like carbon or titanium-containing compounds are added after LST to improve hardness and further increase wear life.

In the clean-removal state, a small, shallow divot appears where material was vaporized. The some-melt condition can arise when using long-pulse IR lasers on metals. Splash that is higher than the material surface will form around the divot. It must be removed in a subsequent step if a smooth surface is desired.

Interestingly, there are applications where splash is left on a textured surface in order to increase friction between two components. An example of this was described in an article that appeared in the July 2012 issue of Industrial Laser Solutions. Engineers at SPI Lasers and MAN Diesel & Turbo were studying the suitability of the LST process on friction discs, which are used when mounting a wheel to a crankshaft. The discs prevent any possible slippage between bolted connections. SPI and MAN were seeking an alternative to thermal spraying the friction discs, a process the diesel manufacturer finds too variable. (An SPI spokesperson said the LST process is still under development.)

Other applications where lasers prove beneficial are those in which increased surface area enhances performance. A good example is solar panels. The larger a panel’s surface area, the higher the number of photons it will capture.

One of the interesting capabilities of lasers is that they can be used to rearrange material without ablation. In the mid-1990s, IBM pioneered the use of lasers to counter stiction problems that occurred with hard-disk drives. (Note: I had the privilege of working with Dr. Andy Tam on this project.)

Stiction caused read/write heads to stick to the platters of the hard drive, due to the failure of the lubricants used to coat the platters. IBM lased small bumps on the ID of the platters to overcome the stiction force present when starting up or powering down the devices.

The lased features consist of a controlled array of nanometer-level bumps produced via local substrate melting (the melt only occurs where the laser’s beam strikes the part).

As I mentioned earlier, it’s only been 20 years since the use of lasers for texturing became a mainstream process. But, given the growing interest in reducing wear and friction in everything from disk drives to hip implants, it seems likely LST will experience significantly more growth over the next 20 years. µ

Mound Laser & Photonics Center Inc. is a precision laser shop in Kettering, Ohio, that offers laser-surface-texturing services. According to the company’s president and CEO, Dr. Larry Dosser, MLPC developed an LST process as a value-added service to augment its other capabilities, which include R&D, prototyping, product validation and production.

MLPC’s surface-texture geometries are sized from 5µm to 200µm and can be laser-machined in a variety of shapes, including hemispheres, squares, lines and divots. The process allows the geometries to be directly written into customer-supplied parts or materials. The shop reports that metals, ceramics, polymers and composites can be textured.

To demonstrate its capabilities, MLPC made a 5mm-wide football and laser-textured it to mimic a full-scale football’s surface. A micromachining engineer at Mound Laser designed the texture, based on an actual football, converted the design into a machining algorithm, then laser-micromachined a sheet of 0.2mm-thick copper with an ultrafast laser that put no heat into the part and left no recast. The depth of the texture is 0.005mm.